Son Doong Cave, a cave belongs to the Phong Nha-Ke Bang grotto system in central Quang Binh Province, has been discovered to be the biggest in the world.

Son Doong cave in Vietnam is one of the most beautiful natural caves and the largest ever found in the world. Hang Son Doong cave complex of Phong Nha – Ke Bang National Park, located in Son Trach, Bo Trach district, Quang Binh province of Vietnam Son Doong cave is one of the largest natural cave ever found in the world. Who first discovered as a peasant named Ho Khanh. In 1991, he happened to shelter in this cave while looking deep into the fores. 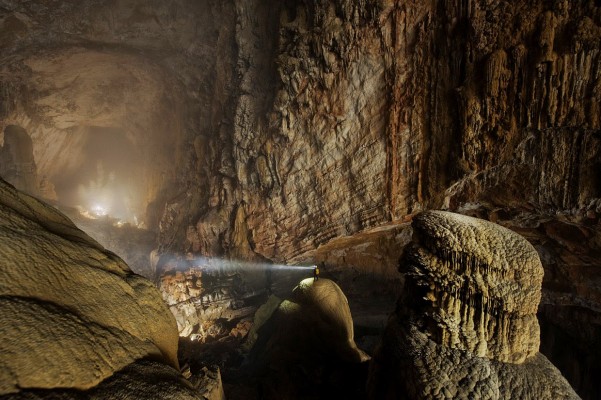 Son Doong 9km long, 200m wide and 150m deep. Besides the beauty that anyone should see that breathlessly overwhelmed by nature’s masterpiece in Vietnam.. Cave was formed about 2 to 5 million years ago, ever since the cave has developed a cave ecosystems along the underground river and trees .. Although discovered in 1991, however, until 2006, when an expedition of the British Royal Society to search for new caves in Phong Nha – Ke Bang, his new Khanh brought his story to tell they listen and expedition decided to come here.

These little round seeds alive in Son Doong cave accidentally formed when mineral water dripping from the cave ceiling too fast during forming stalagmites. In the cave, the explorers even find a primeval forest vegetation with extremely rich and varied Beauty can make any traveler must also overwhelmed The press and the international media has repeatedly reported on the cave masterpiece of Vietnam Photographer Ryan Deboodt decided to exploring and returning to the impressive image of the trip to visit the cave Son Doong and his articles are published in DailyMail