The Phong Nha Nature Reserve is situated on the edge of the Phong Nha/Ke Bang Karst plateau in central Viet Nam. It is only part of the total plateau, which extends to and adjoins the Hin Namno karst of the Lao PDR. Phong Nha contains many large and spectacular caves.

The karst landscape is an extremely complex and ancient one, with high geodiversity and some geomorphic features of considerable significance. It has an Earth crust development history from the Ordovician period (464 million years ago).

This has produced three types of topography and geomorphology. One type is the non-karst landforms, which consist of low, round-top mountains with planation surfaces and abrasion-accumulation terraces along the valleys of the Son and Chay rivers and at the margins of the central limestone massif.

The other major type is karst landforms, which are characterized by old tropical karst mainly from the Mezozoic era, but two-thirds of the site consists of karst from the Cenozoic. Extensive transitional landforms comprise an extremely complex intercalation of limestone massifs and terrigenous terrain with a diversity of rock types. The limestone occupies an area of about 200,000 ha, with a similar adjacent area in the Lao People’s Democratic Republic and its highest point is 1,290 m above sea level. 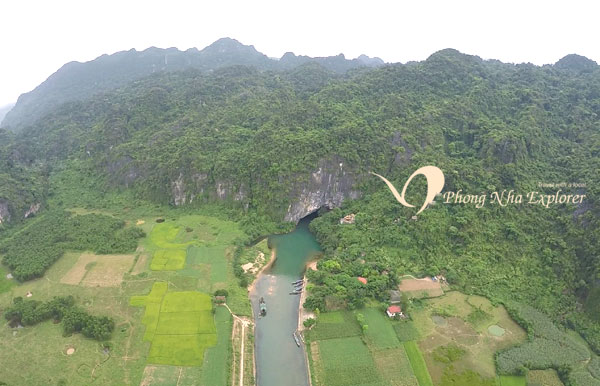 Some 92% of the park is covered by tropical forest, 92.2% of which is primary forest. By far the largest vegetation type is tropical dense moist evergreen forest on limestone. Although this was severely damaged by fire during the war, it is recovering rapidly and is now in a healthy state. It has a high level of faunal diversity and there are many vascular plants.

A total of 568 vertebrate species have been recorded in the site, comprising 113 mammals, 81 reptiles and amphibians, 302 birds and 72 fish. The fauna is typical of the limestone karst forests of the Annamite mountains. The high mammal species richness includes threatened species such as tiger, Asiatic black bear, Asian elephant, giant muntjac, Asian wild dog, gaus, and the newly discovered sao la. The site is particularly rich in primates, with 10 species and subspecies forming 45% of the total number of species in Viet Nam.

The limestones of Phong Nha are interbedded with a number of other rocks. There is also strong evidence that sulphurous solution and hydrothermal action have played an important role in shaping the broad-scale landscape and the caves. The incorporation of the Ke Bang forest into the park has added another very important dimension.

The karst formation process has resulted in many features such as underground rivers, dry caves, terraced caves, suspended caves, dendritic caves and intersecting caves. The active river caves are divided into the nine caves of the Phong Nha system discharging to the Son River, and the eight caves of the Vom system discharging to the Chay River. The Phong Nha Cave is the most famous in the entire system, with a currently surveyed length of 44.5 km. Its entrance is the last part of an underground river that connects with the Son River and tour boats can penetrate inside to a distance of 1,500 m. Other extensive caves include the Vom cave at 15 km in length and the Hang Khe Rhy cave with a length of 18,902 m.

The Phong Nha-Ke Bang karst has evolved since the Palaeozoic era and so is the oldest major karst area in Asia. It has been subject to massive tectonic changes. The karst landscape of the park is extremely complex with high geodiversity and many geomorphic features of considerable significance.

This sector has many ‘fossil’ caves at a high level, which occur when the groundwater and rivers move to a lower level. Only a very few have been visited to date. It is one of the most important eco-regions of the Indo-Pacific. A large number of faunal and floral species occurs in the park, including some endemic to the site.