The Chay River which links Phong Nha Cave with Dark Cave is renowned for its special beauty with hundreds of Bonsai trees on the both riversides. When coming to Chay River – Dark Cave, guests will experience two zip line routes. One route connects the animal conservation station and Dark Cave, which is about 400m long. 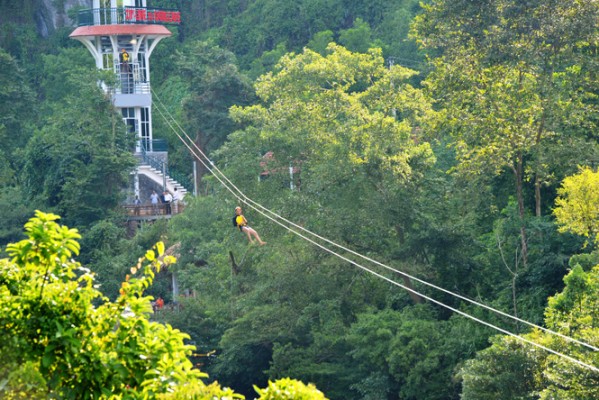 Nearly VND 7 billion has been invested in installing the new service. The zipline runs above the Chay River into Toi (Dark) Cave, allowing tourists to slide into the cave or release themselves for a river bath. The new service is expected to attract visitors to discover the Phong Nha – Ke Bang National Park, especially adventure lovers.
Thanks to new tours and services, in first eight months of 2014, Quang Binh province has welcomed 2.4 million visitors, an increase of 138% when compared to the same period last year.

Phong Nha-Ke Bang National Park is in Quang Binh province, 500 km south of Hanoi. The park consists of 300 different caves and grottos with limestone structures and the oldest karst formation in Asia, dating back some 400 million years. It is home to what is credited to be the longest and largest cave in Southeast Asia.

The other 100m route, which crosses the Chay River. The zip line will offer a new, exciting experience to add to the main Dark Cave tour as Guests fly down the River Chay to the cave entrance. Guests will also have the opportunity to spend time relaxing in the Chay River, swimming and enjoying our new inflatable equipment.

Whether you fancy kicking back in a giant rubber ring recliner with a cold beer, or having fun on our water-based trampoline, be sure to spend some time in the Chay River whilst at Dark cave.