Quang Binh, is not only a central strip of the famous national park Phong Nha – Ke Bang National Park UNESCO World Heritage Site , along the beautiful coast of the story kept proud history of the nation . It also contains the name of a region in its many specialty flavors characteristic causes people to linger here forever just never came about.

For those who have not heard of Quang Binh province, you might want to book a tour here as there are magnificent caves, beautiful Nhat Le Beach and lots of delicious dishes in which it will make your trip be unforgettable.

Quang Binh in her epic songs of this heroic period of peace and simplicity with amazing scenery and delicious food specialties , unforgettable .

In this article, we hope that our can be well introduced and inspire for your future visit.

Go to Phong Nha – Ke Bang In Quang Binh What To Eat?

Not cooked as porridge , the main ingredients are noodles made ​​from rice flour but the Quang Binh has called this dish is porridge soup. Porridge soup is one of the specialties of Quang Binh and Hanoi pho or bun bo Hue . 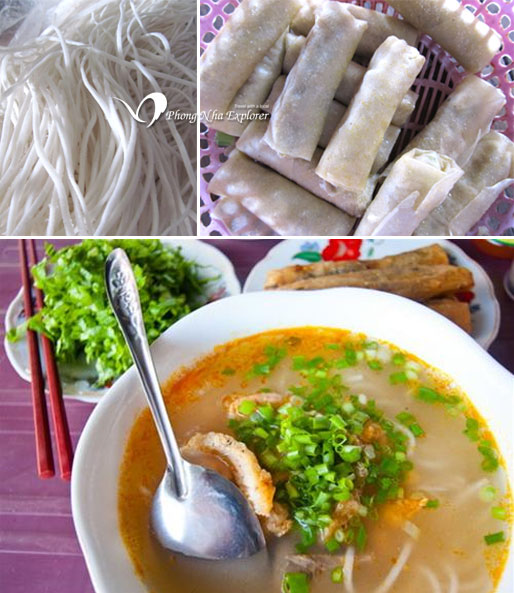 Shrimp and Pork Clear Dumplings is one of Best Vietnamese Food in this province. It came from Hue city. However, it becomes more popular now.

This cake is covered in banana leaves. It stuffing is shrimps and braised pork. Using with chili sauce will bring a stunning flavour in your mouth.

The ingredients are very simple included: cassava powder, river shrimps, wood ear mushrooms and some spices only from the local garden which is why its flavour is different from others