Phong Nha Experience Trip: After reaching Hanoi we instantly regretted leaving the boys. After a very short debate we decided to extend our visa and head back down south to meet up with them again. We headed to Phong Nha to see some of the worlds biggest caves. 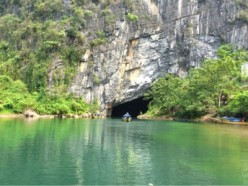 Our sleeper bus arrived in Dong Hoi, which is the main town, then we got our transfer to Phong Nha Explorer where we were greeted by the Slo Bros (Richard’s biking crew). We got ready and headed straight out to the caves. We had a massive gang going along – 11 people on 7 motorbikes! Obviously with a group this size something was bound to go wrong. Roshni, Mihir, Lindsay and Logan ended up getting separated from the others and drove 30km in the wrong direction. Locals are NOT helpful when it comes to directions. Everywhere we wanted to go seemed to be only “4km away” and they kept pointing us in contradicting directions. Two hours later we finally managed to rejoin the rest of the group at the Dark caves.

The Dark caves were an incredible experience. They were only discovered in 1992 and opened to tourists in 2009, which meant there was little to no health and safety regulations. We shoved all of our valuables in a locker and headed to the caves in just our bikinis, life jackets and a hardhat. To get into the caves you had to canoe to the entrance and then walk the rest of the way. The footpath was just wide enough to put one foot down in front of the other and there were a lot of stalagtites. The hardhat was most definitely needed. From then on it was just mud sludge everywhere! There’s no man made pathway so you have to find any means of making it through to the mud baths on the other side. It didn’t help that the deeper into the caves you went, the thicker the mud became. Often you had to fight your way through. After a sufficient amount of time pretending to be pigs and rolling in the mud we left to head to an underwater lagoon where we could scrub off all the mud. They let us swim deeper into the caves and then we turned off all our head torches and swam back in the pitch black. 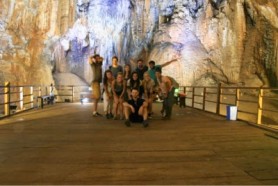 After the Dark caves we all grabbed a bite to eat, played come volleyball and made our way to the Paradise caves. These were completely different to the dark caves. They were massive, with huge stalagmites and stalagtites. The only downside was that you had to stick to the wooden path that was made on top of the natural cave – obviously for tourists. We ended up taking a very casual stroll around and leaving half an hour after the cave had closed. We walked back down in the dark towards our bikes, we saw loads of fireflies, pretty awesome. Rode back to our hostel and all chilled out with a few beers and A LOT of chips.

The following day we headed to the Phong Nha caves. You have to get a long boat into the caves, not as impressive as the Paradise caves but stunning none the less. Afterwards we rode back to near our hostel. The boys played football with some locals, whilst we watched. That night we took full advantage of the 2 for 1 drinks, you could bank them for later too, can’t really say no to that.
14 rum and cokes each later, it’s safe to say we were very merry.

We woke up very early the next day to try and get a day bus to Hanoi. We were told only night busses ran to Hanoi, but tried anyway. There was the option of taking a train, but it was double the price – no thanks. So we decided to hitchhike from Dong Hoi to Hanoi. We met this lovely Vietnamese man who spoke very good English who helped us with our attempt to hitchhike, by making a sign for us. After 30 minutes of trying to get a passing lorry to stop for us, we gave up. EPIC fail. We then resorted to booking a night bus and got a hotel room for the day with a TV, watched movies and ate pizza. 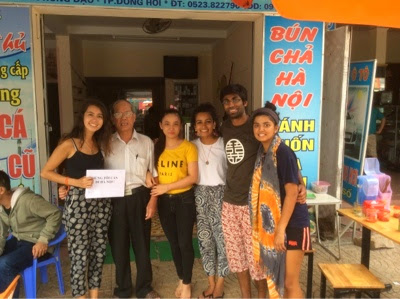